Modes are a way of categorizing Gregorian chant according to the pitch the melody tends to orbit and where the melody finishes. The modes generally came after most of the chant, so sometimes some chant doesn’t totally fit a certain mode, or even seems to shift modality. This is more a thing with longer chant - like the Gradual at Mass. The chant for the Little Office is generally simpler.

Some people look at the modes and wonder if they need to learn all of them. I think it’s not so much a case of learning modes like you’d learn times tables, but being aware of the different modes as you listen to different pieces. Here is a table of the occurrence of different modes in the Little Office of the Blessed Virgin Mary to give you and idea of which ones are more frequently used. 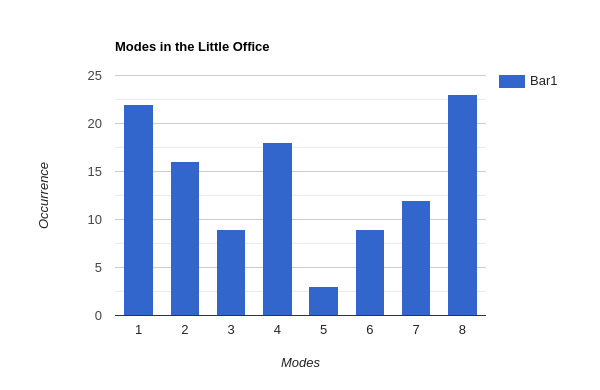 The mode 2 hymn, Memento Rerum Conditor, was counted five times as it occurs in five different hours. The same tune is used in the hymn for Lauds and Matins, so that gives Mode 2 two more occurrences, though you would only learn one tune. I counted the psalms for each mode, so the Little Hours which use one antiphon for three psalms would get three hits, even though there was only one antiphon. So, depending on how you count these occurrences, you may get different results, but it gives you an idea.

Mode 2, 8, 3 and 5 all revolve around Do, so I find them easy to start with. Mode 1 and 6 are written as gravitating around Fa, Sol and La, which have the same intervals as Do, Re, Mi, so they are also easy. The last two modes, 4 and 7 can feel a bit more foreign at first, but they are two of the more common modes, so you do get a lot of practice with them.

I think the main reason for classifying chant into modes is so that you can choose a complementary psalm tone which will blend with the tune. The main part of the Office is the recitation of the Psalms. The Antiphons were an add-on to bring out aspects of the psalms and liven up the singing. In the propers of the Mass some of these antiphons survive while the psalms have shrunk back to one or two verses or even nothing.

I will have to write more about how Psalm Tones work in another article.